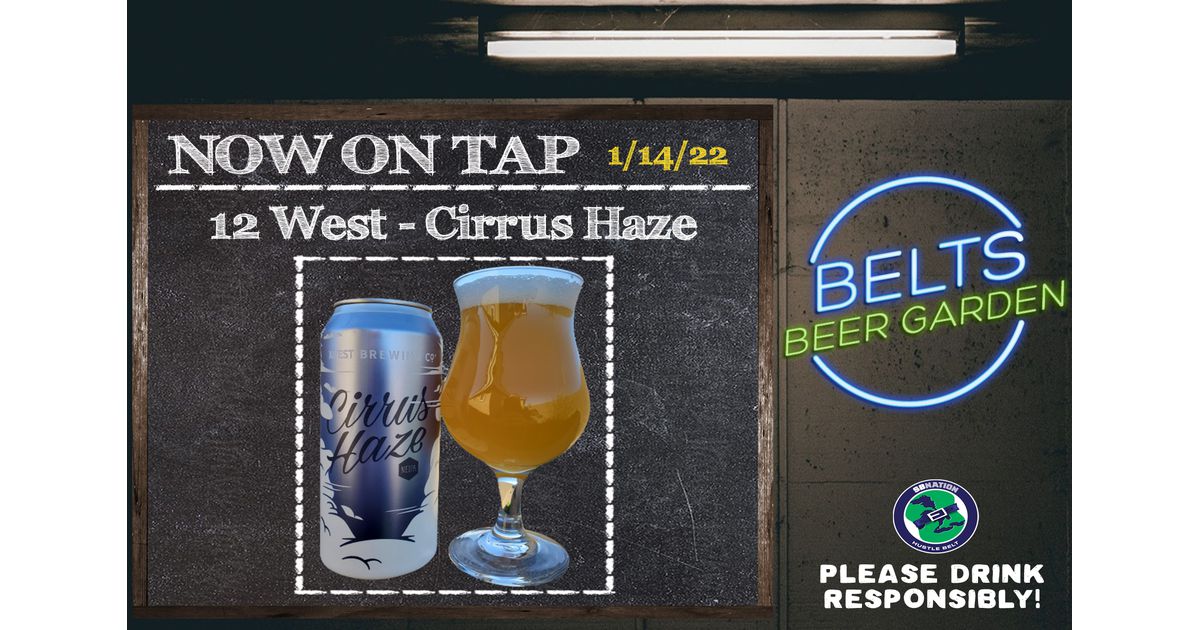 Belt’s Beer Backyard: Why So Cirrus?

I don’t actually discuss my private life in any respect on right here…however I’m at present in the course of shifting from my hometown in Chicagoland to a brand new metropolis in California some 2200 miles away…so that you could be seeing extra western beers for a bit of bit.

However, whereas I’m ready for my new place to be completed, I shall be staying with household in Arizona. And my first beer from out right here comes from a brewery I hadn’t heard of – 12 West Brewing Company.

12 West started in Mesa, Arizona again in late 2016 (proper across the final time I used to be out this manner) and has since expanded, opening a second location in close by Gilbert, AZ, about 13 miles southeast of their OG taproom. They provide a slew of kinds however appear to largely give attention to IPAs/pale ales. Naturally I went for a kind of hopped up brews, making an attempt a can of their Cirrus Haze.

Cirrus Haze is a New England-style IPA brewed with a pair of cryo hops – Amarillo and Mosaic – and lactose. It has a 7.2% ABV and a four-pack of 16-ounce cans prices about $18.

This hazy IPA poured a brilliant, however murky, golden orange shade with a couple of finger and a half of eggshell white head topping the beer. The foam rapidly fizzled down into a skinny ring across the fringe of the glass, leaving some reasonable lacing because it did so.

The aroma was large on tropical fruit flavors with a pleasant backing of flaked grains. Pineapple, mango, orange, and a touch of papaya had been simply identifiable and offered some massively juicy notes. Sitting beneath the fruit had been some mild flaked wheat and oat notes, which did simply sufficient to steadiness out the aroma.

My first sip began with a contact of hoppy bitterness and a flash of carbonation earlier than these fruit flavors actually started to burst.

As within the odor, it was the pineapple and mango that led the best way. The pineapple hit hardest, with its distinct acidic taste actually popping. The sweeter mango balanced out that acidic attribute after which a wave of orange/tangerine appeared, mixing in with mango to supply an insanely candy and juicy taste that ran for a short while.

Towards the center there was a little bit of pithy grapefruit that appeared and introduced a splash of bitterness and a calmly dry, sticky feeling with it.

Quickly after that grapefruit taste appeared, all the pieces started winding down. Cirrus Haze completed fairly cleanly, with only a tiny little bit of that dry/sticky feeling lingering behind for a couple of moments.

It was a really crushable hazy IPA. The 7.2% ABV was hidden insanely nicely and it was a massively juicy, tropical brew. There was a bit an excessive amount of pineapple for my liking, however that simply comes down to private desire…nonetheless, in the event you like that taste, you’ll love this brew.

My first dive into 12 West beers was an enormous hit and I can’t wait to strive extra of their stuff whereas I’m right here!

A Political Garden of Eden